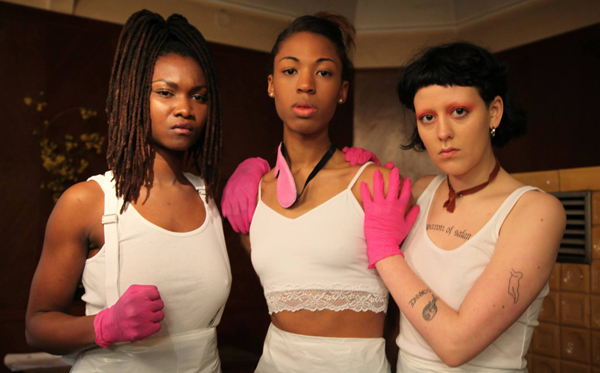 Director Bruce LaBruce's “The Misandrists” is a lesbian hand grenade. It's a raucous clenched fist of queer feminist outrage thrown in the face of anyone who dares to give the patriarchy even the smallest bit of wiggle room. There is no compromise here. In the playfully aggressive punk rock philosophy of “The Misandrists,” all of male-dom is to be dismantled, distrusted and disposed of. This includes men, sex with men, and even small pieces of gender-specific language; the characters all write “womanifestos” for instance. It's angry, it's forthright, it's confrontational, it's sometimes goofy, and it's about time.

Director LaBruce arose during the queer indie cinema boom of the 1990s with films like “No Skin Off My Ass” and “Super 8 ½.” In interviews, however, LaBruce has maintained that he more accurately belongs to the queercore movement of the previous generation. He has said he uses explicit sex and extreme queer theory to fly in the face of the heteronormative establishment. If “The Misandrists” is any guide, his confrontational streak is playfully frosted with a healthy dollop of oddball queer silliness borrowed almost directly from John Waters. LaBruce isn't as energetic as Waters, but his dialogue bears the same no-one-would-really-say-that unreality; I'm willing to bet his screenplay had a lot of exclamation points. A prime example: “Wake up and smell the estrogen!”

The philosophy of “The Misandrists” is repeated openly and repeatedly by Big Mother (Susanne Sachße), the headmistress of a remote German girl's school-slash-terrorist training facility. Big Mother encourages the girls to sleep with one another and foster any and all feelings of sapphic romance with one another. Her ultimate goal is to prime her students to perform in a pornographic film that is meant to be so pure in its depiction of female sexuality that it will, when unexpectedly unleashed on an unwitting public, overthrow men and recruit women regardless of their sexuality.

These lessons are challenged when one of the students, Isolde (Kita Updike), comes upon an on-the-run male criminal (Til Schindler) and chooses to hide him in the school's basement.

This, of course, sounds like the setup for a typical and banal lascivious male fantasy; The “young handsome man hiding in the basement of an all-girls school” scenario is commonly employed in heteronormative pornography. Indeed, that same scenario was toyed with – comparatively gently – in Sofia Coppola's remake of “The Beguiled” just last year. But rest assured, “The Misandrists,” true to its title, has no intention – at all – of catering to male fantasies. The presence of a male in their midst only serves to galvanize their extreme feminist rhetoric and call into question how far they're willing to go.

As it turns out, pretty far. “The Misandrists” features severed extremities and smocks sprayed with blood.

Not content to merely confront the patriarchy, however, nor to merely re-purpose the language of pornography as an apocalyptic expression of queer feminist strength, “The Misandrists” also addresses the phenomenon of trans-exclusionary radical feminism (or TERF as it has been labeled in the trans community). That is: Some cis women have actively excluded trans women from their philosophy, feeling that, in not being born biologically female, then they are not “real” women. This a prejudice that Big Mother herself has to deal with, and the presence of more than one trans female in their group is a monkey wrench none of them expected to have thrown. “The Misandrists” lets no one off the hook.

While its ideas are sound, and its camp is fitfully enjoyable, as a film, “The Misandrists” can feel raggedy. It's only 86 minutes long, but the pacing is as light as a deflated balloon. Indeed, there are passages wherein characters stop everything in order to give an unprompted speech about themselves or to give the backstory of another character, and these asides make “The Misandrists” feel amateurish and unfocused. The story, as well, doesn't build any head of steam, and for extended periods, we forget about the male in the basement entirely. The pacing is so weirdly put forth, that LaBruce has to essentially cut directly to the climax (pun intended) in a crashing smash cut that comes out of nowhere.


These unfortunate filmmaking problems sadly prevent “The Misandrists” from transcending into the higher planes of queer classics. This, however, is something one may be willing to ignore in favor of its revolutionary resolute extremism. Not enough films go to extremes, too few wield politics with a sledgehammer. “The Misandrists” may not be the deftest handler of that hammer, but it bothered to pick it up, and that is admirable.