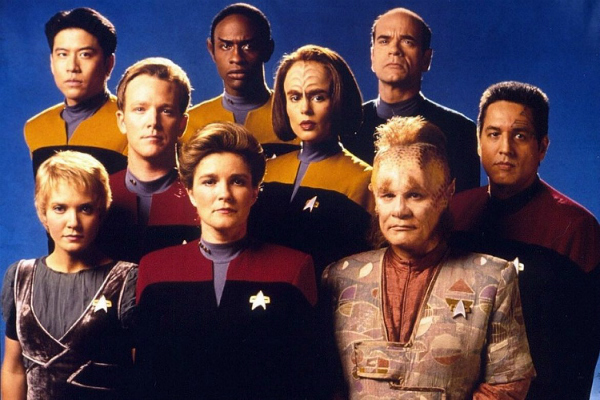 [The following article was sponsored and assigned by our Patreon subscriber Canadian Keith. To learn how to sponsor and assign articles to William Bibbiani and Witney Seibold for publication at Critically Acclaimed, visit our Patreon page.]

Trekkies in the 1990s remember UPN quite well. Paramount's wildly unsuccessful network, which lasted for 11 years and lost the studio nearly $800 million, only ever produced a small handful of hits. Over the years, show after show opened and closed on the network, some of them called the worst of all time (UPN was responsible for 1998's “The Secret Diaries of Desmond Pfeifer,” a tasteless sitcom set in the Lincoln White House). By the time of the great Viacom split in 2005, the UPN was a walking corpse, forced to merge with the equally beleaguered WB Network. The resulting network, The CW, was only slightly stronger than the two of them combined.

During the early heyday of UPN, however, Trekkies the world over were treated to “Star Trek: Voyager,” the premiere show that launched the network on January 16th, 1995. “Voyager” was, in contrast to the concurrent “Deep Space Nine,” another “Trek” show set aboard a Starfleet ship with the iconography and command structure we had learned from seven full years of “Star Trek: The Next Generation.” It was a hit throughout its seven-year run, even if the show – at least according to some fans – contained some truly silly story ideas; only bring up Tuvix to elicit a few Trekkie eye rolls.

Those of us watching “Star Trek” in the 1990s – perhaps the franchise's peak in terms of quality – likely suffered through myriad promos for the show. The immortal Don LaFontaine voiced promos for just about every single episode of “Star Trek” from sometime in the late 1980s all the way through the end of “Voyager” in 2001. And, wow, the hoops he had to jump through. Let me explain.


“Star Trek” has never been a series predicated on action. Drama, sure. And, yes, the shows and movies had their share of phaser fights and starship battles, but “Trek” more often gained its dramatic traction from philosophy, technology, and inter-character conflicts. When “Trek” attempted to be action-oriented it was either viewed by fans as a brief intermission to the show's more cerebral norms (as in 1996's “First Contact” or perhaps 2002's “Nemesis”) or a an outright re-branding sold as a “re-imagination” (as in 2009's feature film, or “Star Trek: Discovery”). Selling “Trek” on its action has always been a fool's errand because the show has never been about action. The characters in “Trek” do not triumph over their “evil” foes by overpowering them or destroying their home bases. They are diplomats who face quotidian, mortal evil in a more pragmatic fashion, using diplomacy and optimism as their primary tools.

But it's difficult to write a 30-second promo selling a pragmatic philosophy or a moral conflict. 30-second promos have to grab you quickly and make sure you're paying attention. As such, the UPN promos for “Star Trek: Voyager” ratcheted up the drama, selling “Voyager” episodes as all equally action-packed. Indeed, the same “action” music was used in most of said promos, turning “Voyager” into an adventure show into a series about fights, murder, and close calls. To be fair, there were fights, murders, and close calls aplenty in “Voyager,” but they occurred at a much more languid clip than the 30-second promos would have you believe.


The need to sound action-packed even led to a few “Voyager” promos that were intentionally misleading. In the promo for the show's 12th episode “Heroes and Demons,” The Doctor (Robert Picardo) had to journey onto the ship's holodeck to investigate an alien phenomenon that was turning crew members into energy. The episode uses a lot of imagery from Beowulf. The editing of the promo made it look like the entire crew was involved in a medieval fight scenario. In actuality, there were far more scenes of Picardo waving a scanner at some special effects.

The promos lie about stakes and scenarios often. In the promo for “Pathfinder,” LaFontaine declares that “'Star Trek: The Next Generation' and 'Voyager' are joining forces!” In your mind, you already have an “Avengers”-like mashup of all the characters from both sharing the screen at the same time. In actuality, The Doctor was shunted into the Alpha Quadrant by Reg Barclay (Dwight Schultz) who was still getting visits from Commander Troi (Marina Sirtis). That's it. No “joining forces.” Just a fun crossover. LaFontaine, however, cannot promote an episode by saying merely “A fun, but minor, crossover event.”


The writers of these promos seemed especially lost when talking up the romantic or comedic episodes. The character of Q (John de Lancie) was a roguish trickster god who loved to toy with the crew, and who could undo any peril any character might be in at any moment. The crew always had to outwit or simply argue with Q until he gave up or gained a modicum of respect for their wishes. “Fighting” Q in the conventional sense wasn't part of the show's makeup. And yet, the promo for the episode “Death Wish” made it seems as if all life hung in the balance, and that the crew might have an actual physical altercation with a god.

Additionally, episodes wherein two characters fell in love were difficult to sell. Yes, there was always romantic tension between, say Paris and Torres, or Chakotay and Seven (???), but hearing LaFontaine talk about it, you would think a breakup would lead to a warp core breach. The romances always had so much more riding on it, out there in the parallel universe of the “Voyager” promos.

The lies in the “Voyager” promos are, of course, not unique to this particular series. Madison Avenue has a long tradition of exaggeration and outright lies in order to sell a product. One need look no further than movie trailers from the 1950s to see this practice in full swing. No film is merely good, but THE SUPREME SHOCK SENSATION OF ALL TIME! Superlatives are the stock in trade of promotional material, and the practice of overselling is so common that we, the consumers, have become savvy to their tricks.

Promotions like UPN's “Voyager” spots also highlight the very ephemeral nature of the form. The promos only have one purpose: To get a viewer to tune in next week. They can make all kinds of wild promises, knowing you haven't seen the episode yet. As soon as the viewer sees said episode, the promo is instantly obsolete, becoming a camp relic one week after its birth. Having seen every episode of “Star Trek: Voyager,” I can get excited for my favorite episodes (“The Thaw” remains the best of the series), but chortle about the frantic, extreme language surrounding all the others.


Additionally, one can't really get a throughline on the show's overall arc when taken in extreme terms. If the promos were to be believed, a major character would die every episode. Without the resolutions, and with open fibs about the setups, watching all the promos in a line is like a bad book report come to life. Like a paper was written based on the CliffsNotes and not the text. You didn't actually watch the episodes, did you, Mr. Promo?

I would perhaps be interested in watching seven years' worth of promos for a series I wasn't familiar with. It would be an interesting thought experiment. Could I determine the show's arcs and character development when filtered through superlatives and climax-less stories alone? I'm guessing not, but it would be interesting to see what I could glean.


As for what I saw with “Voyager,” I saw a weird mirror of what I was familiar with. A mirror universe where everything is slightly misinterpreted, everything is the end of the world, and no one gets out alive. Until, that is, the tearful farewell.

Top Image: Paramount
Posted by Witney Seibold at 9:57 AM