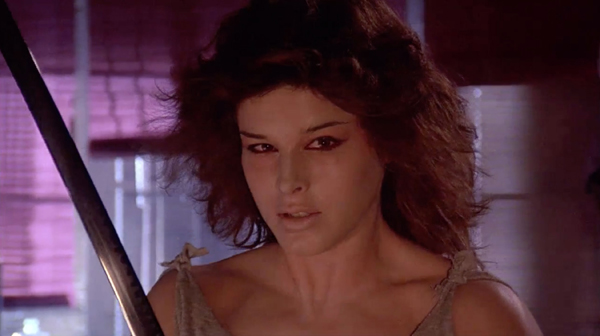 The 1980s was a decade of many campy, ill-conceived, embarrassing or just plain terrible films. I spent most of my childhood consuming sugar-crazed mania flicks like “The Garbage Pail Kids Movie” and “Howard the Duck.” I love a heck of a lot of those films, but “Ninja III: The Domination” (1984) isn’t one of them. And at first, it was hard to put my finger on why.

On paper, I should love this movie. It’s a film about a golf club murder spree that leads, randomly, to an electrician (and part-time aerobics instructor) getting possessed by a ninja, which sometimes shoots out of her arcade cabinet. She goes on a mission of revenge against the cops who killed said ninja, before coming face to face with another ninja, because - and I’m dead serious about this - in the world of “Ninja III: The Domination,” only a ninja can kill a ninja.

There’s not doing your research and then there’s that. Because I’m pretty sure there’s no substantive evidence to support the idea that ninjas were immortal demon spirits who hopped from body to body if they died in non-ninja ways. And I’m damn sure that if there was any such evidence, “Ninja III: The Domination” wouldn’t be the only ninja movie to use it as a plot point.

Ninjas are to “Ninja III: The Domination” what computers were to “Superman III,” just a buzz word the filmmakers assumed the audience was vaguely familiar with but knew absolutely nothing about. So here they can do anything, which simultaneously taps into a zeitgeist while ignoring the reality that, if people like a thing enough to buy a ticket to a movie about it, they probably like it enough to know something.

I guess that’s my problem with “Ninja III: The Domination.” It feels contrived. I know that’s hardly a controversial statement to make about a film that threw the ninja genre, the exorcism genre and the aerobics fad into a blender, but it doesn’t feel like anyone making this film thought it was actually a good idea. There’s no passion, ironic or genuine, for how absurd “Ninja III: The Domination.” It’s just how the cold, unfeeling Hollywood formula worked out this time.

Let me put it this way, if you wanted to make the ultimate “bad” 1980s cult movie, today, using only some kind of 1980s-inspired algorithm, you’d get something a lot like “Ninja III: The Domination.” But I highly doubt you’d get anything as genuinely bonkers as, say, “Hell Comes to Frogtown,” which seems genuinely invested in its saga of sexual virility amongst giant humanoid frogs.

But that’s me, and let’s be fair, most people aren’t me. Most people will no doubt delight in the ridiculousness of “Ninja III.” The opening action sequence is certainly one for the books, in which the evil ninja attacks a golf course and proceeds to kill (I stopped counting but I’m gonna guess) about a million people using only his handheld weapons, his feet, and a helicopter. It’s one of those scenes that goes on so long you begin to wonder the whole movie is going to be just this, so when it finally cuts to Lucinda Dickey from “Breakin’ 2: Electric Boogaloo” fixing a powerline, it’s a tonal shift with heaping helping of whiplash.

Lucinda Dickey deserved better, I think, than Hollywood gave her. She has only six acting credits on IMDb and three of them, including “Ninja III” and both of the “Breakin’” movies, came out in 1984. She’s asked to do some embarrassing things in this movie and she commits to every single one of them, from the offensive eye makeup as her character gets increasingly “Japanese,” to getting tied up by James Hong and flipping around in the air like a comedy .gif of an Olympic acrobat.

All the while, Dickey is saddled with one of the lamest love interests of the 1980s. I pity that actor too. Jordan Bennett plays a cop who tries to ask Christie out, and when she says no because she doesn’t like cops, he yells at her, so now she… respects him? Finds that sexy? What does she suddenly see in him? His loudness?

Because right after that they go back to Dickey’s apartment, and she jokes that she doesn’t have coffee but she does have V8. You might think that’s just a mildly amusing derivation of the old gag that “do you wanna come up for some coffee” is code for “sex is on.” But no, she really does have V8, and when sex is finally on she dribbles that clammy red tomato drink down her neck for her co-star to lick off. And it’s not sexy because A) we all know what V8 tastes like so no thank you, and B) it looks just enough like blood, doesn’t it?

We’re supposed to root for love to prevail, I guess, but he’s as interesting as a lamppost and she doesn’t have anyone else to talk to. So all we really can do is marvel at how garishly overdesigned her enormous apartment is. And of course, wait for the next ninja sequence.

“Ninja III: The Domination” doesn’t skimp on the ninja stuff, thank goodness. That opening sequence is, again, a treasure, and most of the ninja fights and stunts feature impressive feats and giggleworthy, over the top moments like crushing a billiard ball with a bare hand.

I didn’t see “Ninja III: The Domination” until the last few years or so, when the film was lifted from obscurity by online publications who noticed - rightly - that it’s kinda. I wonder, if I had discovered it earlier, if “Ninja III” might have joined my own personal cinematic lexicon of trashy nonsense, alongside “The Ice Pirates” and “Rockula.” That’s nostalgia for you. I may be too cynical now to fully appreciate “Ninja III: The Domination,” and I can’t help but wonder if I should feel bad about that.

But in the end, it really does seem like The Cannon Group, which put out a ton of questionable b-movies (and z-movies) before it collapsed on itself, was actively trying to make the ultimate Cannon movie. And maybe that soupçon of desperation, of throwing every fad at a wall just to make a dent in it, in the hopes that the audience you’re pandering to won’t notice your calculating insincerity, is what makes “Ninja III” a bit of a miss to me.

Then again, to others, that might be just what makes it great. Maybe that misguided Hollywood studio Mad Libs mentality created, just this once, a little bit of magic. It just put a lot of other people under its spell and left me all alone, wishing I could have join in, and have all that fun too.