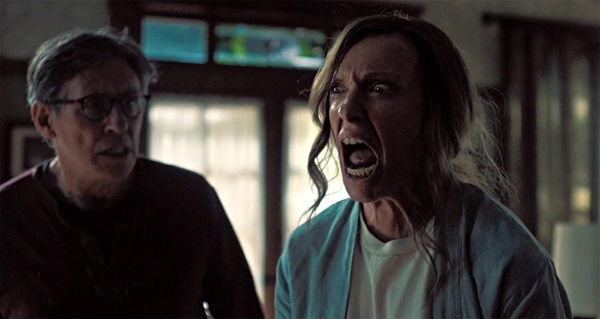 This week's new release: "Hereditary," starring Toni Collette, Gabriel Byrne and Alex Wolff as a family torn apart by shared tragedy, trauma and a history of mental illness. It's one of the most acclaimed horror movies in years, and has already earned a rave review from William Bibbiani.


Watch It On Amazon Prime


Happy families are all alike. Families with Merrye Syndrome are murderers in their own way.

“Hereditary” is an excellent film about a tragic event, the echoes of guilt that can ripple through a family, and the not-so-subtle ways that mental illness can be passed from one generation to the next. There are innumerable films, great and mediocre, about that exact family dynamic, and exploring the dark interconnectivity of family members has been a preoccupation of human storytellers for as long as we've been able to tell stories. We are all, in a sense, afflicted with our families, often living in deep anxiety as to how much they will influence us, consciously or unconsciously. Or, indeed, medically, as the case may be with my selection for a B-movie to pair with “Hereditary,” Jack Hill's 1967 cult classic “Spider Baby.”

The first film whereon Hill (“The Big Bird Cage,” “Coffy,” “Switchblade Sisters”) was credited as a writer, “Spider Baby” is a lurid, cheap, discomfiting motion picture about a remote family of devolving weirdos and the trials they suffer. Set largely in a dilapidated house, “Spider Baby” explores the Merrye family and the way that have come to live with Merrye Syndrome, a genetic condition so rare that the Merryes are the only ones afflicted. Merrye Syndrome causes its sufferers to begin, usually at puberty, to regress mentally and physically until they are essentially animal savages. The story of “Spider Baby” involves a pair of clear-minded gold-digging cousins who attempt to usurp the family fortune, and the kindly family chauffeur (Lon Chaney, Jr.) who stands to obstruct their plan.

“Spider Baby” is filthy and unnerving, serving as a slightly less oily drive-in rendition of “The Texas Chainsaw Massacre.” But the film also serves as a symbol for the darkness that a family can unwittingly share. All families tend to cloister themselves, whether physically in distant properties, or socially with shared memories and dumb in-jokes. “Spider Baby” is a cynical and exploitative freak show that can, at its best moments, punch a viewer in the gut with its dark familial cynicism. It's a rollicking, perverted time, and highlights what your family did to you.

Great horror stories are rarely about what they say they’re about.“A Nightmare on Elm Street” isn’t just about a demon with knife fingers who kills you in your sleep, it’s a surreal exploration of the sins of the parents revisited upon their children. “The Shining” isn’t just about a family that moves into a haunted hotel, it’s a grotesque devolution of the American family unit, and a harsh exposé of how close they already were to mania and murder.

“Hereditary” is no different. You can focus all you want on the supernatural explanations for the terror that takes place in Ari Aster’s creepy new movie, but at its heart “Hereditary” is a movie about multiple generations of mental illness, and the toll they take on an already fragile family. And I put it to you that no other film captures the horror family life more viciously, more sympathetically, or more unusually than “Twin Peaks: Fire Walk With Me.”

David Lynch’s prequel to the hit television series “Twin Peaks” was denounced upon its release for ignoring so many of the elements that people enjoyed from the series. The quirky humor, the soap opera subplots, and many of the most enjoyable side characters vanished, in favor of a harrowing story about the days leading up to the murder of Laura Palmer. But all those elements that audiences missed were just the trappings. “Fire Walk With Me” is all about the real terror at the heart of “Twin Peaks.”

What “Twin Peaks: Fire Walk With Me” does - and if you don’t know who killed Laura Palmer, here’s where I issue a SPOILER ALERT - is remove the mystery from the series, and hold the audience helpless as we simply watch what happened. And what happened, regardless of the show’s complex mythology, is very simple when you look at it from Laura Palmer’s perspective. She is a victim of rape and incest, and what’s worse, she’s held captive by her entire community, where everyone projects their idea of perfection onto her, and ignores her many, obvious screams for help.

The inexplicable cinematic storytelling that Lynch would later employ, to celebrated effect, in “Twin Peaks: The Return” get a rehearsal run in “Fire Walk With Me.” Many scenes, particularly in the first act, are of no help whatsoever if you’re trying to figure out the plot. But they lull us into a state of susceptibility, where the mad becomes commonplace, and the horrors that befall Laura Palmer feel like they spring from a guilty world, not just a guilty party.

And at the heart of it all is Sheryl Lee, who (much like Toni Collette in “Hereditary”) gives an all-time great performance, exploding with emotional vulnerability, and trying to keep that explosion inside of her anyway. It’s a devastating role in a devastating movie, where the supernatural part is eerie, but the “real” story has an even greater impact.


Top Photo: A24
Posted by Critically Acclaimed at 4:09 PM