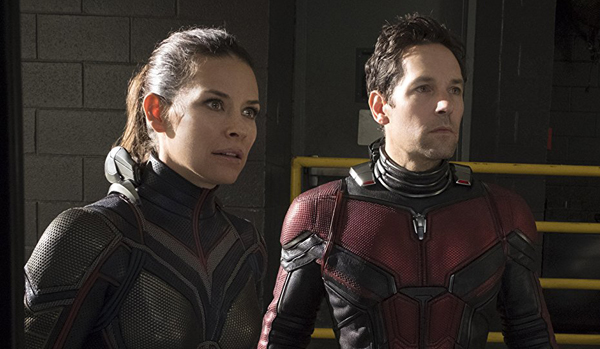 After the doom-and-gloom devastation of “Avengers: Infinity War” it was believed that “Ant-Man and the Wasp,” a lighthearted comic caper about wisecracking shrinking superheroes, would be just the palate cleanser Marvel fans needed. And maybe, just maybe, it really is part of some brilliant ploy to make ease our collective pain by lowering the franchise’s stakes. But it’s probably just a normal action-comedy with modest ambitions, because people make those all the time without ulterior motives.

The action kicks off when Scott has a dream about the Microverse, which seems to include a message from Janet. Hank and Hope begrudgingly recruit Scott to help with the rescue, but in the process they run afoul of a powerful arms dealer named Sonny Burch (Walton Goggins) and the mysterious Ghost (Hannah John-Kamen), who can walk through solid objects. They each want Pym’s latest invention for their own personal benefit, and they’ll do just about anything to get it.

The fast-paced storyline, with Hank Pym’s office building shrunk down to the size of a subwoofer, and the heroes and villains stealing it from one another, over and over again, is a hoot of an idea for a superhero movie. Rudd, Lilly and Douglas once again have entertaining chemistry, and John-Kamen is, in particular, an intriguing villain whose presence adds both drama and suspense. The action sequences are inventive to the point, sometimes, of lunacy. Whatever critiques can be lobbed at “Ant-Man and the Wasp”, and they’re about to, suffice it to say that a good time can be had while watching it.

And yet, “Ant-Man and the Wasp” spins several one plates too many. In addition to the Pyms and Ghost and Burch, the film also tries to find time for Lang’s wacky sidekicks, his extended family, and the whimsical FBI agents who are trying to keep him at home and out of costume. That’s a whole lot of side-stories to balance at the same time, so it’s hardly surprising that director Peyton Reed has trouble making each of them seem important, or at least vaguely relevant to the film.

Then again, at the heart of it all, “Ant-Man and the Wasp” is all about balance. Scott’s life was approaching normalcy, and his values - work and family - were clean and focused. But then he feels compelled to go out of his way to do the right thing and it throws his life into chaos. Financial security could be lost, familial ties could be threatened, and even his freedom might be at risk. It’s a small-scale but satisfying concept, a story about the day-to-day practical costs of heroism (“super” and otherwise), and finding a way to fit everything that matters to you into your life. Which, as we all know, can be exceptionally difficult.

But that message is ultimately subverted, because the film itself never finds a healthy balance. Scott Lang’s family is safe, and is at most an occasional inconvenience to his work and heroics, so they don’t come across as terribly significant. Scott Lang’s job is portrayed as a total nuisance, especially since his employees - through their action or inaction - repeatedly place the lives of others at risk. Meanwhile, Hank and Hope are absolutely, 100% right about everything, and they’re working overtime to save lives and prevent their technology from getting into the wrong hands. They’re important. Nothing else seems to come close.

That’s a problem, because we’re supposed to care about that other stuff too. Lang is the focus here, and his divided priorities are driving the action. He’s got to answer the phone whenever his daughter calls. He’s got to meet up with his business partner Luis (Michael Peña) or they’ll lose a valuable client. He’s got to avoid being seen in public or he’ll violate his house arrest. These are vital components of his personal life, and yet, whenever they are depicted in “Ant-Man and the Wasp,” the movie treats them like time-consuming pains in the ass. And it’s hard not to take the movie’s cue and think of them that way.


Marvel Studios has pulled off the unthinkable task of making umpteen motion pictures that are all, if nothing else, entertaining blockbuster distractions. Their consistency is astounding and commendable. “Ant-Man and the Wasp” is yet another in that long line: a well-intentioned and charmingly acted romp with clever action sequences and a few neat ideas, which is entertaining to watch but not quite resonant enough to stick with you after it’s over. It comes close to greatness but stops a little short. And that’s not a big deal.

Top Photo: Marvel Studios
Posted by William Bibbiani at 9:44 AM