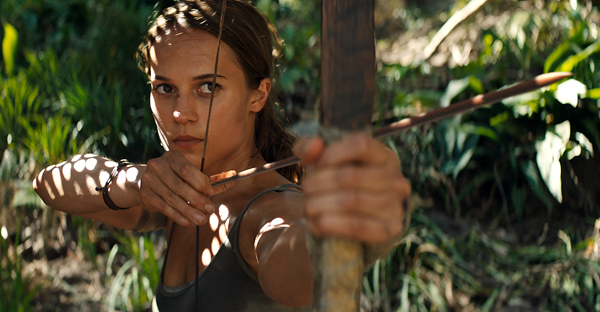 Physical media is alive and we intend to keep it that way. Every week on Let’s Get Physical Media, we highlight a handful of the most interesting new releases on Blu-ray - including cult films, classics and recent hits - to make sure you know what’s worth your hard-earned money.

June 12, 2018 brings us one of the most underrated sequels in movie history, one of the best yeti movies nobody’s ever seen, a sublimely bizarre aerobics/ninja/exorcism hybrid, and a spectacular 2018 adventure film that deserved a bigger audience.

George Lucas’s most popular film (that isn’t called “Star Wars”) is the 1973 comedy “American Graffiti,” a sprawling coming of age story about a group of teenagers having raucous adventures over the course of a single night. It’s a beloved movie that sold a lot of 1950s nostalgia and a heck of a lot of soundtracks, and hardly remembers that it had a sequel.

“More American Graffiti” came out in 1979 and was immediately swept under the rug, and was larger unavailable on home video for decades afterwards. Critics balked, it didn’t make much money, and it deserved infinitely better. It’s a bold, experimental, exceptionally entertaining and surprisingly thoughtful sequel that I would argue is more ambitious, and arguably even better than the original.

The film takes place on New Year’s Eve on four consecutive years, from 1964 to 1967, and follows most of the characters from the original “American Graffiti” as they embark on life-changing stories, including young love and drag racing, darkly comedy Vietnam War anecdotes, the intersection of burgeoning suburban feminism and flourishing urban protest culture, and the free-spirited hippie music scene.

Each segment is filmed in a different cinematic format and editing style, and together they weave a vivid tapestry of the 1960s as it evolved into something completely unrecognizable from the 1950s. It’s a sweeping, expansive tale of young adulthood that’s even more exciting than the tightly defined “American Graffiti,” and whether you like it as much as I do or not, I suspect you’re going to discover that it’s so danged interesting that it deserved a bigger audience and a better reputation.

There aren’t a lot of great yeti movies, but right near the top of the (very small) list is Ryan Schifrin’s clever low-budget thriller “Abominable.” The film premiered on the SyFy Network in 2006, and remains one of the best films ever to debut on the low-fi monster-centric network.

“Abominable” stars Matt McCoy (“L.A. Confidential”) as a man who lost his wife in a horrifying climbing accident, which also cost him the use of his legs. Now he’s returning to his mountain cabin for the very first time, with a particularly insensitive nurse as a companion, and he watches helplessly as nearby campers are killed by a terrifying abominable snowman. Naturally, nobody believes him, and so it’s up to him to warn the potential victims and save the day.

It’s a smart premise, and Matt McCoy proves right here that he deserved (and still deserves) a bigger acting career. It’s his movie and he defends it tooth and nail, milking every scene for everything it’s got. And the monster itself, once it’s fully revealed, is a huge and creepy thing, with a giant maw that Schifrin uses to shocking effect in one of the better gross-out scenes of the 2000s.

“Abominable” flew under a lot of radars but it’s finally on Blu-ray, and it’s worth picking up if you love yetis, clever low-budget horror films, and lengthy cameos by horror icons Lance Henriksen, Jeffrey Combs and Dee Wallace.

Okay, so you’ve already made two successful low-budget action movies about ninjas. How do you make the third one special? If you’re Cannon Films, you combine your lucrative ninja franchise with “The Exorcist,” for no particular reason, and come up with “Ninja III: The Domination.” It’s one of the weirdest horror movies and ninja movies of the 1980s, and that’s really saying something.

I can’t think of any better introduction to Cannon Films than “Ninja III,” because it’s just the kind of bonkers, kitchen sink, throw everything you’v got at the wall and pray something sticks genre movie they were infamous for. It’s stars Lucinda Dickey from “Breakin’” and “Breakin’ 2: Electric Boogaloo” as a telephone line repairwoman who moonlights as an aerobics instructor, who gets possessed by a dead, evil ninja. And naturally, the only way to free her is through more ninja fights.
Shout! Factory puts out absurdly good Blu-rays of absurd cult movies, with great transfers and special features aplenty. If anything about aerobics ninja supernatural possession movies sounds appealing to you, it’s going to be worth buying. This movie is a trip.

It’s hard to believe that a film like “Tomb Raider,” which was heavily promoted, starred a recent Oscar-winner, and based on one of the most popular video game franchises of all time, could fly under the radar. But it barely made a blip when it came out earlier this year. “Black Panther” was completely dominating the box office and the pop culture conversation at the time (with good cause), and “Tomb Raider” simply didn’t make enough of an impression to jostle it from the #1 spot.

But hopefully audiences will take the opportunity to catch up with “Tomb Raider” on home video, because it’s a rock solid action/adventure film. Alicia Vikander (“Ex Machina”) stars as Lara Croft, whose billionaire father went missing on a treasure hunting expedition, and who ends up following him into the unknown, and ultimately into a trap-laden tomb because obviously.

Roar Uthaug (“The Wave”) directs this film, and he gives it a breathless quality, racing from one completely different action set piece to the next, giving the new environments the wonder they deserve, and keeping Alicia Vikander challenged at every turn. It’s an origin story for Lara Croft and that gives Vikander an opportunity to not just prove she’s tough, but also to deal with the emotional ramifications of the violence she’s forced to endure and inflict throughout the story.

“Tomb Raider” is an exciting, well-crafted film, and certainly one of the best “Indiana Jones”-inspired adventure films we’ve ever had. It’s certainly one of the very best video game adaptations. If you missed it in theaters, give it a chance now. It’ll give your home entertainment system a workout, and almost certainly impress you with how fun it is.

Top Photo: Warner Bros.
Posted by William Bibbiani at 6:11 AM