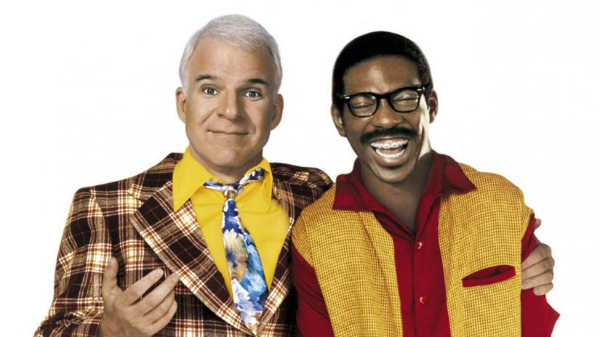 [The following article was sponsored and assigned by our Patreon subscriber Geoff Alterman. To learn how to sponsor and assign articles to William Bibbiani and Witney Seibold for publication at Critically Acclaimed, visit our Patreon page.]

Frank Oz's “Bowfinger,” written by Steve Martin, was released in theaters in August of 1999 to a generally positive response, although it was by no means a giant hit. In the 19 years since its release, it has quietly gathered a small cult of affable devotees who hold it up as a great example of broad showbiz satire.

I sharply recall seeing “Bowfinger” in 1999, and I even wrote an (unpublished) review at the time, which fell in line with popular opinion: I found the film to be approachable, pleasant, slight and more amusing than outright funny. The film's core idea was its best feature: Having no money to make a feature film, an ambitious B-movie director shoots a sci-fi thriller, guerrilla style and in public, around a famous Hollywood star who has no idea he's being included.


What could have been a film about true Hollywood outsiders, the evils of Scientology, and real-world injustice in the ridiculously over-moneyed realm of Hollywood turns into something merely brisk and watchable. There's meat in here, but Frank Oz left it off the sandwich (to employ a truly weird metaphor). I can only imagine what an edgier director like, say, Carl Reiner would have done with this material. Or even Ivan Reitman; I'd rather he had made “Bowfinger” than the terrible “Six Days, Seven Nights” (1998).


“Bowfinger” tells the story of a group of Hollywood outsiders with dreams of big fame. These outsiders, however, aren't oddballs or weirdos in the “Ed Wood” sense, nor are they amusingly pathetic losers like Harry Zimm from “Get Shorty.” They're simply broke.

Bobby Bowfinger (Martin) comes upon a wonderful alien invasion script called “Chubby Rain” written by his accountant Afrim (Ada Alex-Malle). Bowfinger gathers up as much talent as he can muster, including a put-upon valet (Jamie Kennedy), a few too-loyal actors (including a great Christine Baranski), and a new-in-town ingenue (Heather Graham) who has little in the way of intelligence, but is more than willing to sleep her way to the top.

Bowfinger also hires a camera crew consisting of Mexican immigrants who he ushers over the border himself, all while Border Patrol agents fire off rounds. In the film's funniest running gag, these crew members become deeply enamored of the filmmaking process and are eventually seen reading back issues of Cahiers du Cinéma in the background.

Bowfinger's unwitting lead actor is superstar Kit Ramsay (Eddie Murphy) who is as famous as Eddie Murphy was in 1989. Ramsay suffers from unshakable anxiety and has developed a deep paranoia about the world. His only solace is the Scientology-inspired Mind Head organization which (like Scientology) is a mishmash of spiritual platitudes and pseudo-psychological analysis. Ramsay admits to his Mind Head handler (Terence Stamp) that he also compulsively exposes himself to the Lakers Girls, and has the urge to continue doing it. That last plot point plays much worse in 2018 than it did in 1999 when flashing was generally written off in movies as a comedic punchline rather than sexual assault.


The central problem with “Bowfinger” is that we spend far too much time with the title character. Bowfinger is not enough of a maverick or an oddball to be truly charming, and spending time in his head space isn't doing him any favors. He comes across as a cynical con man who is only in it for the money. He lies to his crew, bilks auditioning actors (even though he already claimed he had enough money to get the movie made), and berates those who are helping him.

Perhaps I watched “Ed Wood” too many times before coming to “Bowfinger.” Perhaps I was too much a fan of John Waters and Frank Henenlotter. But Bowfinger is no Hollywood outsider with wacky dreams of making strange art. He's just a cynical moneyman with little compassion for others. The only character he seems to care about is Jiff Ramsay, Kit's wimpy and awkward twin brother who joins the production as a body double.

There are a lot of interesting ideas lurking somewhere inside “Bowfinger,” Hollywood's own cult of celebrity being the most obvious. Filmmakers doggedly pursue actors merely because they are famous, and those actors lives are so nakedly within the public eye that they suffer psychological damage. Indeed, so many rich celebrities have been damaged by their financial and fanatical pursuers that an entire church has sprung up to succor them (and take more of their money).

But “Bowfinger” is not interested in satirizing or deconstructing this psychologically damaging tit-for-tat system, nor is it pointedly talking about Scientology or any of its acolytes (Martin has said in interviews that Mind Head is not a direct reference to Scientology). “Bowfinger” prefers to follow the antics of a filmmaker who is merely caught up within the system, presenting him as a lovable goof who is trying to be as resourceful as he can. There is an underlying cynicism to the premise, but the execution is far too cuddly to match the script's acid.


So the final result is watchable and fun, but vaguely frustrating. The protagonist is cynical when he should be weird/charming, and the tone is charming when it should be venomous. 1999 was the perfect time to sell a bitter, sarcastic movie about the filmmaking process. The world had recently seen “Wag the Dog” (1997), a film about a Robert Evans-like producer who works with Washington to construct an elaborate piece of media propaganda. “Get Shorty” has the perfect sarcastic tone, perfectly blending the low world of a loan shark and the trashy world of a horror producer. Heck, Robert Altman's “The Player” was only five years old at this point, and David Mamet's “State & Main” was to come out the following year.

“Bowfinger,” in contrast to these films, is a trifle. A film that is too breezy to gain the same amount of traction.


Which is a pity, as it had such a great idea to start with.