Witney Seibold Reviews 'The Girl in the Spider's Web' 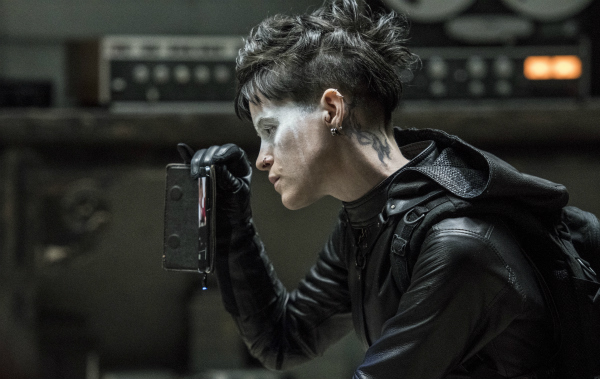 Uruguayan director Fede Álvarez first caught the eye of American audiences with his 2013 remake of “Evil Dead,” which was striking less for its only-somewhat-novel approach to its story (was the protagonist possessed or simply in the throes of a drug withdrawal?) and more for its awesome amount of blood and gore (the finale features a chainsaw through the face while blood literally rains from the sky).


His second feature, 2016's “Don't Breathe” was a clever, exciting, taut, and twisted little thriller that can easily be gathered within the enormous school of excellent indie horror films that have been gracing theaters for the last decade. His new film, “The Girl in the Spider's Web” is his first large-scale studio-sanctioned mainstream big-budget project and, well, all of a sudden he's far less interesting. I guess necessity really is the mother of invention.


Álvarez's new film, “The Girl in the Spider's Web,” was not based on a novel by the late Stieg Larsson (The Girl with the Dragon Tattoo), but on a fourth book in the celebrated Millennium series written by David Lagercrantz, under the blessing of Larsson's estate.

This is the fifth film to be based on Larsson's famed trilogy. All of your favorites are back: Lisbeth Salander (previously played by Noomi Rapace and Rooney Mara, now played by Claire Foy) the dangerous bisexual Goth hacker who runs afoul of dangerous and powerful men. Mikael Blomqvist (previously played by Michael Nyqvist and Daniel Craig, now played by Sverrir Gudnason) also returns as Lisbeth's connection within mainstream journalism, although this time Blomqvist is given very little to do other than watch Lisbeth do her work from afar.

Also returning are montages of computer screens, hidden cameras, hidden bombs, close calls, and badass chases (this time, Lisabeth escapes pursuers by motorcycling across the surface of a near-frozen river).


New to the series, however, is a sense of stale fatigue. Gone is the bracing thrill of Lisabeth's fuck-you punk attitude, and in its place is dull mealy-mouthed angst. Gone are the slithery tone and mysterious uncoiling of a taut plot, and in its place is the straightforward telling of a generic story (incidentally, about having to retrieve a physical MacGuffin from a cadre of evil hackers).

Indeed, many of “Spider's Web's” plot points seem to have been lifted directly from Phil Alden Robinson's cyber-thriller “Sneakers,” including a computer chip that can essentially hack into any and all computer systems. When you're making a cyber-thriller in 2018, but you're borrowing plot points from a cyber-thriller that was made in 1992, maybe think about updating your tech and your lingo.

This is not to say that “The Girl in the Spider's Web” is completely without merit; there are a few notable action and chase sequences to get the blood racing. I was fond of a foot chase through an airport wherein Lisbeth was using her hacking skills to remotely unlock a series airport doors for a compatriot (an excellent Lakeith Stanfield, whose plot function is tenuous) while he was being pursued by bad guys. There are also a few striking visuals, including an exquisite villainess (Sylvia Hoeks) who is never seen without her shimmering evil red dress.


But the plot, characters, and even tone are recycled to the point of morbidity. I no longer need to see a film wherein someone rifles through the aftermath of a fire, only to pick up and examines a burnt document that was left partially and conveniently intact.

Additionally, “Spider's Web” seems to have abandoned the striking criticism of misogyny that underscored and supported the excellent 2009 film version of “The Girl with the Dragon Tattoo.” Larsson's original title was directly translated as “Men Who Hate Women,” and the film played out very much as a feminist revenge fantasy. Lisbeth regularly wreaked vengeance on the men who assaulted her and used her spiky attitude and aggressive dress to frighten and intimidate the men who would fliply sexualize her. She was in charge of her sexuality and slept with the men and women she wanted to.


In “The Girl in the Spider's Web,” we are introduced to Lisabeth on a mission of feminist vengeance, where she is seen beating, stringing up, and robbing a rich asshole who had been abusing his wife. Lisbeth wires all his money to the abused wife and lets her flee her domestic prison. For a moment, “Spider's Web” promises to be a vigilante picture wherein Lisbeth is poised to be a feminist Batwoman, taking to the streets to undo institutionalized misogyny once and for all. Sadly, this promise immediately peters out in favor of the above-mentioned plot of rote action scenes, boring character development, and unnecessary twists that add more padding than intrigue.


The Millennium movies are, of course, in a grand tradition of lurid airport novels that frequently feature reused plot points and familiar horror scenarios. But while “The Girl with the Dragon Tattoo” transcended its genre with a unique character, heady themes, and authorly skill, “The Girl in the Spider's Web” simply rolls with the tropes of its literary genre origins, openly repeating something that feels stultifyingly familiar.