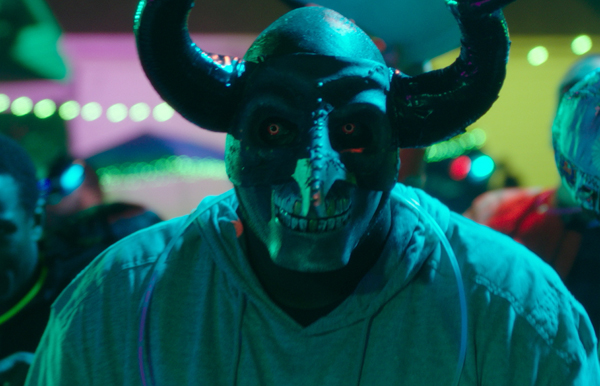 This week's new release: "The First Purge," the prequel to the violent, political and highly lucrative "The Purge" franchise, which details how the dystopian future began, with a horrifying experiment on Staten Island. Y'Lan Noel ("Insecure"), Lex Scott Davis ("Superfly") and Marisa Tomei ("Spider-Man: Homecoming") co-star, in a film directed by Gerard McMurray ("The Burning Sands").

Watch It On Amazon Prime

The "Purge" movies aren't just about a national holiday where all violence is legal, it's about the inherent violence in our nation. Not everyone participates in The Purge, but enough people are sufficiently angry, and willing to take any excuse to act on it, that the nation feels consistently divided. Often, it seems, at literal or figurative war.

Goremeister auteur Herschell Gordon Lewis explored that divide with about as much subtlety, and even more gruesomeness, in his cult classic "Two Thousand Maniacs!" It's a film about a group of yankees who stumble across a southern town, which is in the midst of a historical festival centered around the tragedies of the Civil War. The yankees are the guests of honor, but they soon discover - to their horror - that every single person in town plans to sacrifice them, publicly and violently, as penance for the North's sins.

Hanging on to old grudges, regardless of who started it, can have generational consequences. "Two Thousand Maniacs!" is forthrightly about the way Americans cling to animosity and perpetuate it throughout the centuries. Those who think society has become enlightened are proved, depressingly, wrong. And the catharsis that certain citizens feel when acting on their oppressive urges is anything but satisfying to everybody else, who suffers as a result.

It's ironic and frankly a shame that "Two Thousand Maniacs!" speaks so little about the racial divides inherent to America's past, and focuses instead only on a North/South, Conservative/Liberal division which - to be fair - doesn't seem to be going away anytime soon either. In that respect, "The First Purge" tackles the issue with a bit more honesty, but their both ultraviolent and non-too-subtle examples of the horror genre putting America on the stand, and finding a large portion of the country guilty.

Watch It On Amazon Prime

The evolutionary arc of the “Purge” films has been a fascinating phenomenon to witness. The first “The Purge” was based on a fascinating idea – that, in the future, the government will instate an annual 12-hour period wherein many violent crimes, including murder, are legal, under the notion that purging your negative emotions will calm you for the rest of the year – but it played out as a mediocre home invasion film. Critics and audiences immediately noticed that “The Purge” was largely about wealthy white people wanting to murder off a poor person.  That “emotional release” thing was a front for something more sinister.

In the three sequels since, the class politics of the series have become only more pronounced, depicting, with varying degrees of effectiveness, a future wherein the government is populated by wealthy white moralizing monsters, and the POC underclasses are fighting against the system that openly wants them dead. “The Purge: Election Year” remains the best of the series, but “The First Purge” makes explicit that Purge Night was never, even for a second, about releasing one's anger. The New Founding Fathers always wanted you dead. The messaging is obvious, but salient nonetheless.