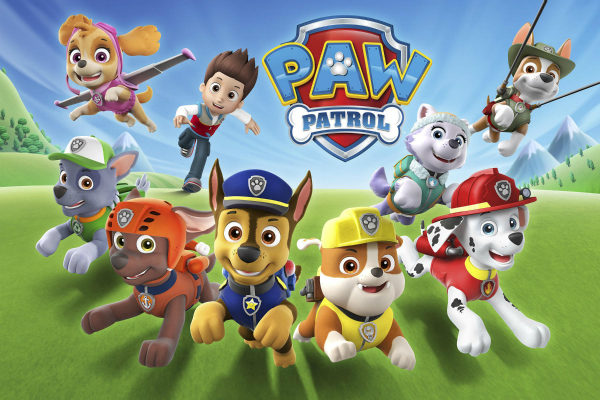 My son is 4, which means, as of this writing, I have watched several dozen hours of "PAW Patrol," Nickelodeon's current cash cow. While "PAW Patrol" isn't a terribly nuanced or sophisticated piece of children's entertainment - it's yet another nondescript object in a long, long line of friendly, color-coded crime-fighting animal shows - I constantly thank my lucky stars that, as a parent, it could be so much worse. My son, for instance, could have chosen something truly intolerable, forcing a wedge between us, causing a schism in our lives that would never be bridged until a tearful reconciliation 30 years later.

"PAW Patrol" is not a bad show by any stretch, but it is frustratingly innocuous, especially coming as it does from Nickelodeon. Nickelodeon, as I recall, was once known for impish and off-center shows like "The Adventures of Pete and Pete," "The Ren & Stimpy Show," and everything out of the Klasky Csupo canon. And while I'm sure there might be numerous wonderfully oddball programs currently running on Nickelodeon, in comparison, "PAW Patrol" - out of the younger-skewing Nick Jr. - is pretty weak sauce.

As someone who has consumed a good deal of "PAW Patrol" with a young person, I have discovered an ancient survival technique long held by discerning parents; i.e. the best way to keep one's sanity in the face of hours upon hours of bland, ultra-friendly kiddie entertainment is to mentally review and dissect the meaning and lessons couched deeply the flavorless pabulum in front of you.

"PAW Patrol," if you're unfamiliar with it, is a Canadian CGI-animated TV show that debuted back in 2013, and has been steamrolling through the kiddie TV world ever since. In its six years of life, "PAW Patrol" has given birth to toys, sheets, Halloween costumes, party supplies, and has likely - along with the "Cars" movies - kept Baskin Robbins in business through ice cream cake sales alone.

The show is about a 10-year-old boy named Ryder who lives in Adventure Bay (presumably on the west coast of Canada) with a team of talking puppies and no seen parental figures. Ryder's puppies - dogs possessed of human intelligence - have been enlisted to take over the city's public works on a freelance basis, with each pup having been assigned a different department.

Chase, a German Shepard, is the Patrol's police dog. Rubble, a bulldog, is a construction worker. Marshall, a dalmatian, is a firefighter. Skye, a cockapoo, belongs to the air force I think. Zuma, a chocolate lab, belongs to the coast guard. And Rocky, a mixed breed, is the Patrol's waste manager. Occasionally, the core six puppies are joined by Everest, a huskie, who works in the snow, and/or Tracker, a chihuahua who works for the forest service.

In order to fulfill their duties as public servants, the PAW Patrol has been equipped with high-tech communication equipment and each one has a custom (transforming!) vehicle that has been specially engineered for use by puppies. They also each wear robotic backpacks, allowing them to grab with robots hands, spray water, fly, etc.
The first curious detail one notices about the PAW Patrol is that the central dogs are the only talking animals in this universe. Our crew meets cats on a regular basis, and the cats meow and preen like ordinary cats. Indeed, most of the Patrol's rescue missions involve other animals, and none of their rescue objects speak or have any sort of anthropomorphic qualities.

As such, we learn early on that the PAW Patrol are some sort of genetic aberrations. They have been specially granted their human-like intelligence and talent for speech over other animals. By extension, one can posit that they were given their jobs in the public works by an unseen benefactor, who hired them (?) based on their special abilities.

"PAW Patrol," then, is a story of rule by the genetically superior. It is an elitist, Randian fantasy wherein the superior beings are granted control of all public systems (but then, this notion of "rule by the superior" is a dark ideology that bubbles up beneath many superhero stories).

Who granted the PAW Patrol with their genetic superiority? Are they a scientific experiment? If so, what's the end of the experiment? Are puppies being raised as public servants meant to eventually rise in the ranks of public office? Will there soon be intelligent dogs running for mayor? For governor? Will they occupy every high office?

Whoever the PAW Patrol's mysterious benefactor is, they clearly have world domination in mind. This is illustrated by the behavior of Mayor Humdinger, the show's ostensible villain. Mayor Humdinger is the mayor of nearby Foggy Bottom, but he spends most of his time in Adventure Bay seeking to discredit the town. Armed with a cadre of specially trained kittens, Mayor Humdinger seeks to rob Adventure Bay of civic prizes and rewards. He resents the success of the PAW Patrol and seeks to outstrip their shiny public image with his own team of trained animals.

Indeed, Adventure Bay may be a front. In the opening credits of "PAW Patrol" we see the whole town, and it seems small and quaint. The pups can explore the entire city within a matter of hours, and they visit the same familiar locations time and time again. Everywhere they go, there are no crowds. There is the blithely ineffectual Mayor Goodway, a chicken enthusiast with no head for civic matters. Indeed, Goodway gropes her way through the town, barely perceiving the buildings around her, waiting until her pet chicken, Chickaletta, wanders into danger, inciting the Patrol. There are a pair of twin sailors, a farmer, a young boy, a maybe a few citizens besides, and yet the city is well-maintained, clean, and regularly holds civic events such as statuary contests and the like.

Adventure Bay is clearly, like Celebration, FL, a manufactured town. It did not evolve organically in the Hegelian sense but was built from the ground up, likely as a training ground for world-dominating intelligent dogs. It's no wonder Mayor Humdinger wants to destroy the pups and discredit Adventure Bay. The city may be the flashpoint for a "Planet of the Apes"-style apocalypse, only with heavily equipped talking dogs.

I have a theory that the mastermind of the PAW Patrol Project may be Ryder himself. He seems assured, confident, and unfazed by the extraordinary feats that his team of talking dogs commits, and his authority is never questioned. If the PAW Patrol answered to any authority, surely we would see them at some point. But Ryder is never seen on the phone with the Canadian government, the PAW Corporate office, or any other boss, teacher, parent, or mentor. Which would imply that Ryder is the final authority.

So Ryder is either a child prodigy (possible), or he is an adult who has genetically engineered himself to appear 11 years old. Part of the PAW Patrol Project is genetic manipulation, and Ryder, the brains of the operation, has granted himself eternal life. An eternal 11-year-old with a team of equipment-heavy talking dogs? That he controls with video games, "treats," and a slew of mind-numbing slogans and catchphrases to keep them placated? Isn't that... a supervillain plan?

This is not part of the show, but it's something I must address. "PAW Patrol" features two female pups, Skye and Everest. They are capable characters on the show, but they seem weirdly persona non grata when exploring the show's copious merchandise. The "girl" toys are, even to this day, colored pink, and the two are very frequently omitted from group shots of the pups. My son has a "PAW Patrol" toy organizer, and each drawer has a different pup on it. Skye is absent. Marshall and Chase are clearly the stars of the show, but to leave Skye off completely only further cements a deeply sexist, gender-coded world of toy manufacturing that we should have abandoned decades ago.

Perhaps the true extent of Ryder's genetic experiment will reveal itself. Perhaps there is a symbol or cultural meaning I haven't caught. But until then, I will continue to watch "PAW Patrol" for as long as my son likes. Perhaps someday, he will give me the insight I miss.