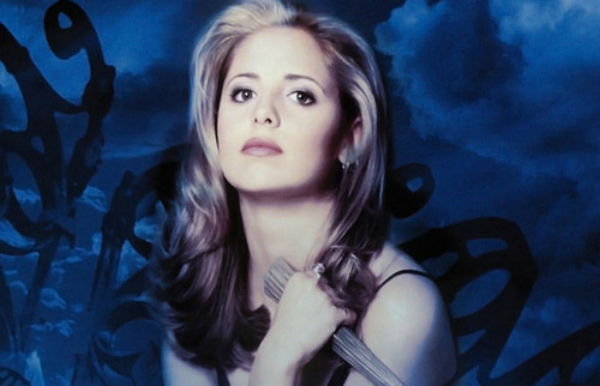 [The following article was sponsored and assigned by our Patreon subscriber Brian Niland. To learn how to sponsor and assign articles to William Bibbiani and Witney Seibold for publication at Critically Acclaimed, visit our Patreon page.]


“Buffy the Vampire Slayer,” a TV show created by Joss Whedon, based on his screenplay for a 1992 horror/comedy film, ran from 1997 until 2003 on various networks, accumulating a cult audience that from a brief glimpse appears to be even more passionate about their object of affection than your average cult audience.

Between chat shows, commentary tracks, endless 'blogs, and fan fiction, “Buffy the Vampire Slayer” is perhaps one of the most discussed TV series in the annals of the internet; Between “Buffy,” “The X-Files,” and “Mystery Science Theater 3000,” the early days of geek-friendly discourse on the then-nascent online world were pretty much cemented.


Having now seen the first season of “Buffy the Vampire Slayer” for the first time, I am personally a little baffled as to the tenacity of its cult. I have been assured by Buffy cultists – loudly and repeatedly – that the first season of “Buffy the Vampire Slayer” is a mixed bag at best, and that the show improves greatly in later years. This is, of course, quite true of many TV shows, including several I hold as my personal favorites. But for “Buffy,” I will have to take their word for it, as nothing I have seen in the show's first season would have compelled me to return for a second.

“Buffy the Vampire Slayer” is ostensibly a comedy show. The series follows the title character, Buffy Summers (Sarah Michelle Gellar), a shallow and fashion-obsessed upper-middle-class blueblood suburban cheerleader who also happens to be the latest in a long line of “chosen” vampire hunters. The show's humor is derived from the casual juxtaposition between Buffy's lightweight, sitcom-ready high school concerns (making the cheer squad, showing up her catty rival Cordelia played by Charisma Carpenter, etc.) and her responsibilities as a monster killer (she slays more than just vampires). It's a series that essentially asks: What if the girl described in Frank and Moon Unit Zappa's “Valley Girl” was also Van Helsing? It's a cute enough idea.

To aid Buffy in her ongoing monster-hunting quest, she is given knowledge and readings of ancient texts from the school librarian Rupert Giles (Anthony Stewart Head) and hacking skills from an off-the-rack nerdy girl named Willow (Alyson Hannigan). Essentially we have a Daphne, a Fred, and a Velma.


Unfortunately, we also have a Shaggy in the form of Xander (Nicholas Brendan). Although, given how aggressively abrasive the character is, he may be more closely likened to Scrappy Doo. Xander's presence on the show is like a lead weight around its neck, dragging an otherwise innocuous show into the doldrums of irritation. Xander's witless flirting, bland attempts at wry humor, and expressionless face made me hate every moment he was involved in the show's proceedings. He is ineffectual and annoying. Even his name pisses me off. Brendan may be a fine actor in other projects and he may have even found a better handle on the character in later seasons of “Vampire Slayer,” but I found no redeeming qualities in Xander in the 12 episodes I saw.

Although the humor seems sedate and perhaps even quaint now, there was a time in the late 1990s when the flip, casual dialogue was considered revolutionary. Indeed, the flip dialogue is often considered Joss Whedon's greatest strength as a writer. Whedon places his characters in extraordinary and extreme fantasy situations, and they respond with post-modern, deadpan jokes. His characters aren't terribly distinguishable – they all seem to have the exact same sense of humor – but some of his one-liners are genuinely funny. This is a profile of Whedon's work, however, that I have taken from a few of his feature films, and not necessarily from the first season of “Buffy.”

From what I have seen, “Buffy” is pretty weak stuff. The humor is not funny enough for the show to emerge as a comedy show, the teens are not interesting enough for the audience to be involved in their drama, and the vampire lore is not satisfyingly sketched out, leaving it a failure as a horror show. “Buffy” is frustratingly anodyne. All it seems to have going for it is Whedon's flip humor. And seeing it in 2019 reveals the humor as dated; the wit that Whedon pioneered in the 1990s is now mere background noise. One must have context, I think, to really understand how bracing this show must have once been.


In the pilot, Buffy moves to a fictional town called Sunnydale, CA, which I think is somewhere in the Valley. She lives with her single mother, who may as well be a cardboard standee for the amount of cognitive space she takes up on the show. Sunnydale, it is explained, sits on top of a Hellmouth, meaning the town is just lousy with vampires and other creatures of the night. Although it's a small town, there's plenty of slaying to be done. Buffy, in the course of her slaying, catches the eye of a mysterious vampire stud named Angel (David Boreanaz) who shares an uneasy mutual attraction with Buffy and who will eventually be the star of his own spinoff series.

Sunnydale, possibly by coincidence, was the name of the high school in David DeCoteau's 2009 epic “The Brotherhood V: Alumni.”

Few of the episodes in the first season emerge as anything above boilerplate monster shenanigans. There is an episode wherein Xander turns evil. There is an episode wherein a witch is flinging hexes all over the school. In the series' one clever twist, Buffy faces off against a creepy living ventriloquist dummy that she assumes to be a killer, but who turns out to be a monster hunter himself, and who had been cursed to live in the body of a dummy. It's the one eye-catching reversal in an otherwise pretty safe TV series.

My theory: at some point during the pre-production of “Buffy the Vampire Slayer,” it was a genuinely weird show with a more cynical sense of humor and a more off-center tone. But, through the usual route of TV development, all the weirdness was ripped out of it, and all the edge sanded off. I feel like I have seen the raw version of “Buffy the Vampire Slayer” in the form of “Bone Chillers,” a truly peculiar Saturday morning children's horror show that debuted the year before “Buffy” on ABC. That show also featured a Fred, a Velma, a Daphne, and a Shaggy, and was also about a haunted high school lousy with monsters and creatures and ghosts. That series, however, was unhinged, strange, and featured cult icons like Paul Bartel, Mary Woronov, and Richard Elfman. I will take the Pepsi Challenge with “Buffy” and “Bone Chillers” any day of the week.


To reiterate, I know that “Buffy the Vampire Slayer” is said to improve and improve greatly over the course of the next few seasons, and that even the dullest of characters are given interesting arcs. I know of Buffy's eventual death and resurrection. I have seen the musical episode (another nod to Richard Elfman, this time heavily referencing “Forbidden Zone”) and I know that Willow would eventually come out as a lesbian and openly have a romance with another woman, a rarity for mainstream genre entertainment at the time.

But none of the show's promise is hinted at in the season I have seen and, to state it again, I would not be moved to see a single episode more given the content of the first season. I found the show to be slight when it wasn't shrill, and not entirely as clever as it thinks.

I encourage “Buffy” fans to watch “Bone Chillers” and comment.