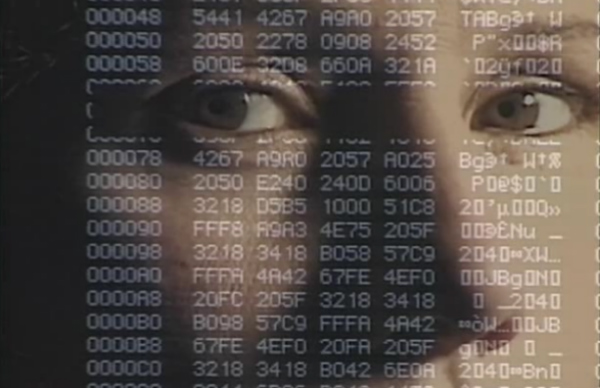 [The following article was sponsored and assigned by our Patreon subscriber Pierre Coupe. To learn how to sponsor and assign articles to William Bibbiani and Witney Seibold for publication at Critically Acclaimed, visit our Patreon page.]

Back in the 1990s the world was teetering on the cusp of a technological boom that led to profligate consumption of cellular phones, a dot-com bubble encouraged by the promise of online life, and a video game culture that we are now more deeply entrenched in than ever. Virtual reality was, practically speaking, still on the horizon, but the concept had been introduced, and it promised to be the Next Big Thing in human evolution.

During this technological epoch – marked by a joyous consumer enthusiasm for new widgets and toys – many artists, writers, and storytellers took the opportunity to become wistfully philosophical about the state of human consciousness, and many began to ask questions as to the ultimate end to technology.

Are we simply making our lives easier and easier to the point of mental stagnation? Are we using technology to eventually gain ultimate mastery of all Creation, making ourselves into God? If we can replace actual reality with a convincing facsimile, will actual reality cease to be important? Is it moral to replace the real with the manufactured? And isn't that, perhaps, the very nature of Platonic metaphysics? That we live in a world of ideas? Will technology help us know more, or simply allow us to create the world afresh with the old ideas we already have?


Very quickly, the conversation around technology became an epistemological debate on the nature of what is real. Invent one widget, and Plato rears up from the grave, once again mentioning his shadows on the wall of a cave.

In 1997, five years after “The Lawnmower Man,” but two years before “The Matrix” and “eXistenZ,” French experimental filmmaker Chris Marker (“La Jetée,” “San Soleil,” a hundred others made from 1952 to 2011) weighed in on the tech boom with “Level Five,” a shot-on-video meditation on the nature of VR and video games, a meditation that quickly becomes a sad lamentation on the way technology serves to gloss over the past and erase our memories rather than preserve them.

“Level Five,” as with much of Chris Marker's work (based on what little I have had the opportunity to consume) may be a difficult film for a casual audience. Using low-tech cameras, and tapping into CD-ROM-level computer imagery that was at least five years out of date in 1997, “Level Five” may, aesthetically speaking, strike an audience member in 2018 as quaint and laughably dated; “Level Five” has indeed elicited titters from at least one reviewer who compared it to dated cyber-thrillers like “The Net” and “Hackers.”

And indeed the aesthetic may only be palatable to people who equipped with nostalgia for it; that is: those of us who were old enough to have used CD-ROM technology back in the late 1990s when such things were cutting edge. For example: In one scene, the film's only fictional protagonist (Catherine Belkhodja) tries on different digital “masks” to evoke the anonymity that online life provides its users. This is illustrated by superimposing blocky video game masquerade masks directly onto VHS footage of her face. It looks like something a high school kid would put together, even at the time.

But if one chips through the aesthetic, one will find a dark and very serious gaze at the way media changes the way we look at the past. The story, such as it is, involves our protagonist completing an unfinished video game left behind by a mysteriously vanished collaborator/lover.

The game she must complete is an accurate VR recreation of The Battle of Okinawa, a real-life event, not frequently discussed in the West, wherein hundreds of thousands of Japanese citizens, potentially facing a gruesome death at the hands of the incoming Allied forces during WWII, were forced to commit suicide at the hands of the Japanese military. It was a horrendous event, and is described in great detail via interview footage, some of which is with Nagisa Oshima, the masterful director behind “Double Suicide,” “In the Realm of the Senses,” and “Merry Christmas Mr. Lawrence.”

Over the course of “Level Five,” the protagonist finds that she cannot change the outcome of the Battle of Okinawa, but must instead play it out as it happened. As modern audiences, we tend to look at films as being authoritative and definitive. We watch a film – specifically of an historical event – and it fills in visual gaps that our imaginations may not have been able to fill in before. A film essentially serves as our memory of historical events. They are, in short, a virtual reality wherein we can bend history into a more meaningful or satisfying conclusion; no matter how accurate, a film is still a filter.

Marker seeks to criticize and perhaps puncture that notion with “Level Five.” In trying to make a game of The Battle of Okinawa – in allowing ourselves a means to re-fight the battle, change the ending, and give ourselves a more satisfying version of history – we are doing memory a disservice. If we can create a believable virtual reality wherein everything is as satisfying and non-threatening as possible, what do we do with actual tragedy?

Historical tragedies like The Battle of Okinawa, Marker argues, transcend media. It is 1997, and we are deliberately plunging ourselves deeper and deeper down the rabbit hole of self-reflective online echo chambers where identity is gone and idealized universes exist, but actual history, death, and tragedy will always keep us uncomfortably anchored, whether we like it or not.

What happened to the dark philosophical portents on the evolving technology of the 1990s? They seem to have been silenced by proliferation. As technology became more commonplace, and the real world began to actually answer questions as to what online life would look like, all of the alarmist language of “Level Five,” “The Net,” “We Live in Public,” and “The Lawnmower Man” immediately began to feel quaint.

YouTube allowed vloggers to manufacture verisimilitude in exchange for online popularity and advertising revenue, online gaming became the norm, and we began to indulge in fantasies about how the internet was going to give everyone a glorious avatar of pop culture significance – free from the shackles of their real-world bodies – that allowed them power in a new electric dimension.

We, essentially, rocketed towards the gross oversimplified philosophy of “Ready Player One,” a film I wish Chris Marker had lived long enough to comment on (he died in 2012 at the age of 91). Few asked questions about how the worst impulses of humanity would also be amplified, allowing for a rise of hate, sexism, and ignorance to spread throughout the world.


In 2018, “Level Five” certainly doesn't feel fresh or immediate. Its philosophies are from an earlier era, and pondering the effects of technology on human consciousness in 1997 is a different conversation than the ones we should be having now. But watching it in the era of Twitter does make “Level Five” feel like a distant lamentation on the failure of technology – indeed of cinema itself. It's a record of the questions we once asked, and how we essentially already lost the fight.