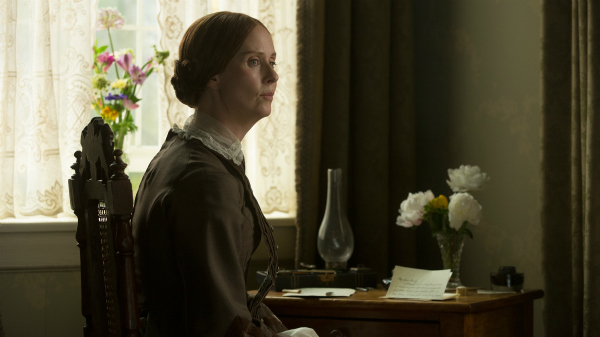 [The following article was sponsored and assigned by our Patreon subscriber Nic Hebert. To learn how to sponsor and assign articles to William Bibbiani and Witney Seibold for publication at Critically Acclaimed, visit our Patreon page.]

Although she remains a giantess in the hearts of poetry aficionados everywhere, making a feature film from the life of Emily Dickinson has been a dodgy proposition. Dickinson, you see, led a very non-cinematic life.


She spent most of her days bound to her progressive family's palatial New York mansion, fending off suitors and having long, acid-laced conversations with the visiting intelligentsia. Her late nights were, by her request, the only time she wrote, churning out the simple, musical, emotionally complex poems that would eventually leave their mark on poetic history.


Dickinson, according to Terence Davies' 2017 biopic, was also an inscrutable figure, gently drawn to some visitors and actively repelled by others, all contingent on whether or not their poetic views and gentleness of spirit subtly aligned with hers. As played by Cynthia Nixon, Dickinson emerges as a dynamic, yet pained figure, often struggling to find true kinship with those outside her family. Her father (Keith Carradine) has been grooming his children since birth to be intellects and free thinkers, open to question the stodgy conventions of the time. We see many scenes of young Emily (Emma Bell) defiantly pushing back against polite society. But no punk rocker is young Emily. She's as thoughtful as Davies' staid and careful direction.


Nixon carefully walks a balance between innocence, wit, and self-pity with a moderate degree of success; Nixon often vacillates between innocent schoolgirl and embittered intellectual within a scene, giving Dickinson a scattered quality through several sections. It's when she's conversing with her best friend Vryling Buffam (Catherine Bailey) that Dickinson is allowed to solidify and soar. The audience may sense a romantic attraction to Buffam, but the film never implies anything so directly. All of Dickinson's emotions are kept under lock and key, only let out during frequent poetic recitations.

This is not to say that Dickinson is depicted as a killjoy. Indeed, in “A Quiet Passion's” funniest scene, Dickinson finds herself facing down a tight-lipped pastor's wife who is so unbelievably boring that she abstains from drinking... anything but water.


Davies has always presented his films with a slow-moving, muted formality that may keep many audiences as arm's distance. His “The Deep Blue Sea” explores infidelity and the crushing emotions therein, but only ever films intense conversations and sorrowful faces as they look wistfully out windows at gray British afternoons. “A Quiet Passion” depicts a life that was practically crippled by its own good manners, leading the film itself to feel humdrum and frequently emotionally arid.

This, however, may be the most appropriate approach when discussing the life of Emily Dickinson. She was, after all, openly suffocated by the formality of the world around her, often forced into the arms of potential suitors against her will. This despite her open-minded upbringing. Living this way – we see by the end of “A Quiet Passion” – eroded her resolve, turning her bitter, leading to a commentary on the way women have eternally been sanded down by history's obnoxious marriage conventions.

Dickinson was shy, wrote at night, never achieved great fame (“Success is counted sweetest/By those who ne'er succeed./To comprehend a nectar\Requires sorest need.”) and has no greater desire than to explore the wild, glorious words of her soul. She never found the kindred spirit she sought in her life, but her poetry has created many.