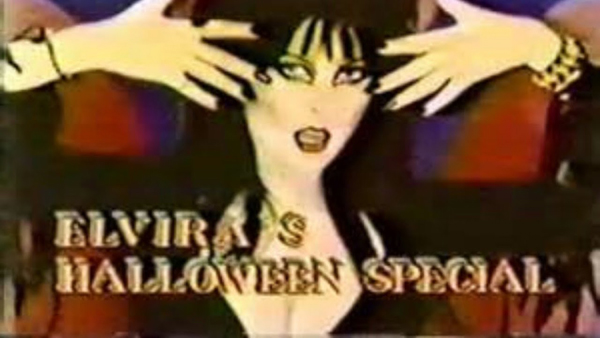 [The following article was sponsored and assigned by our Patreon subscriber Salem Horror Fest. To learn how to sponsor and assign articles to William Bibbiani and Witney Seibold for publication at Critically Acclaimed, visit our Patreon page.]

It’s staggeringly passé to suggest that, in the wake of media like “Stranger Things” and “It” and “[Insert Nostalgia Property Here],” nostalgia for the 1980s is at an all-time high. Of course it. People love the 1980s. Or rather, they love the stuff they remember about it, a.k.a. the stuff that still glitters.

The 1980s were a time when media consumption was escalating, thanks to the increasing availability of home video and cable television. Filmmakers, producers and artists were struggling to create enough content to occupy that vast new landscape, and for every all-time classic we still remember today there’s a well-intentioned, amiable but slapdash outing like “Elvira’s MTV Halloween Special.”


Elvira, as played by Cassandra Peterson, is a horror icon who debuted in the 1980s. She dresses like a gothic lust icon straight out of Hammer, but her personality is that of a stand-up comic “Valley Girl.” Her TV show, “Elvira’s Movie Macabre,” featured the character hosting a series of (mostly bad) old horror movies, intercut with loose comedy segments. If the segments were funny, they were classic. If they were bad, Peterson saved them through the sheer, unbridled force of her charm.

Elvira would go on to star in one great movie (“Elvira, Mistress of the Dark”), one mildly amusing movie (“Elvira’s Haunted Hills”), and tons of comic books. But in the meantime she hosted a two-hour MTV event, the first half consisting of sketch comedy material - some scripted, some ad-libbed - and the second half consisting of “Elvira’s Weirdest, Strangest Videos of All Time.”

That first half is where all the juicy stuff comes from, and why I introduced this review by pondering the lost cavalcade of half-formed, idea-driven 1980s entertainment wave. “Elvira’s MTV Halloween Special” is so loosely constructed, so quickly paced, and totally 80’s that half the sketches are indistinguishable from the commercials that precede them.

One of the sketches is a fake commercial for a fake college called “The Salem State College of Witchcraft and Voodoo,” which offers courses on potions, black magic and (teehee) “hex education.” One of the real commercials features Dracula doing math, and concludes with “Imagine, the Prince of Darkness with a solar calculator!”

The line between satire and reality blurs so hard in “Elvira’s MTV Halloween Special” that it’s hard to tell whether it’s even intentional. It’s possible that Elvira’s breezy, inexpensive comedy show simply had the same anything goes, low budget mentality as the desperate “Glowatch” and “Yugo” brands of the 1980s.

Whether or not these particular gags are ahead of their time, it’s safe to say that Elvira was. And not just because her hilarious “exorcise video” gag, featuring 360-degree neck twists, was later lifted wholesale by a 1992 comedy about hell’s television station called “Stay Tuned.” (Correction: It looks like SCTV did this gag first. Thanks for the heads up!)

Elvira was a Renaissance Woman in the Dark Ages of basic cable. She seems energized by the sketch comedy possibilities of her Halloween special, the unscripted interview segments with passers-by in Salem, and fake horror-themed game shows like “The $25,000 Pentagram,” which ends with Elvira getting into a fist fight with a nun.

In contrast, the host segments where she introduces her favorite horror-themed music videos are affable but perfunctory, and I’d be very surprised if she did them in more than one or two takes. It’s clear she’s comfortable coasting on personality when she’s lounging on a couch and making fun of self-serious horror characters, whipping out one double-entendre after another.


The actual music videos she hosts are an interesting bunch. Some of them are eccentric tie-ins to motion pictures, like the eyebrow-raising love theme from “Godzilla 1985” called “I Was Afraid to Love You.” Others are largely forgotten minor classics of the genre, like “Wicked Ways” by The Blow Monkeys, which features gothic, “Dark Shadows” and “Addams Family” inspired decor and a catchy-as-hell pop riff.

Of course, it’s a countdown, so we’re just waiting to find out what Elvira thinks is the freakiest, weirdest, scariest music video of all time. And Elvira knows it, because she makes us wait for an extra commercial break just to find out. What’s the winner? What’s the weirdest, the worst, the weirdest?

Look, we all know she’s building up a punchline. But in this far-off year of 2018 I never would have guessed that the punchline would be “Rock It Out” by Pia Zadora.

Zadora, who regardless of her talents was something of a pop culture go-to gag in the 1980s, appears in the music video as a sexy resident of a female prison, and rocks so hard they… let her out, apparently? It’s hard to tell what the whole the point is, other than audiences still remembered that “Chained Heat” was a thing, and Pia Zadora wanted to look badass in that setting.

It’s important to revisit the media that nobody remembers, because the stuff we remember is the stuff that stood out. You get a much better sense of a time period by immersing yourself in the movies and television and books and comics that were churned out than you will by revisiting the content that defied expectation. “Elvira’s MTV Halloween Special” is a 100-proof shot of MTV in the mid-1980s: enthusiastic and entertaining, but incredibly cheap and only a half-step removed from legitimately bad.

And that, of course, is exactly where Elvira was born, and lived, and still thrives today. At the intersection of brilliance and an eye-roll.

Top Photo: MTV
Posted by William Bibbiani at 9:44 AM