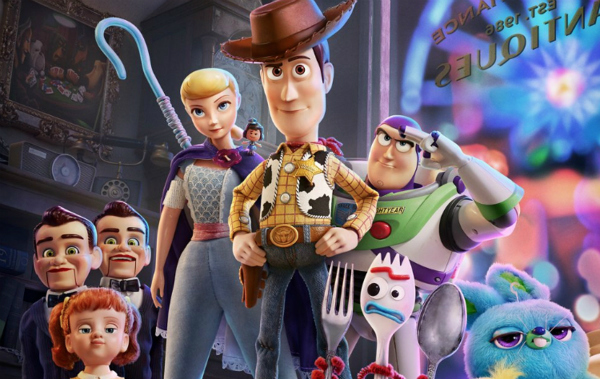 It was nine years ago when “Toy Story 3” seemingly closed out its series on a perfect note: Woody the cowboy, Buzz the spaceman, and all his toybox compatriots were handed – in a wistful scene that evokes tears just in the recollection – from the hands of Andy, their now college-aged owner, into the waiting arms of an enthused toddler named Molly. Kids grow up. It was time to put away childish things. And, once again, Pixar, with rare universal access to it, opened up the pipeline directly into our collective hearts.

As such, the announcement of a late-in-the-game follow-up to “Toy Story 3” elicited rage from my blackened soul.

The story was over, and you finished it perfectly, Pixar. How dare you try – again – to cash in on these characters. This was, clearly, a cynical move by latter-day Pixar which fell from innovative and emotional original stories into uncreative “Cars” sequels and Disney knock-offs like “Brave.”

It is not only a relief to report that “Toy Story 4” is an excellent film, but also something of a minor miracle. Not only did director Josh Cooley and screenwriters Stephany Folsom and Andrew Stanton find a logical continuation of Woody's story, but they addressed some of the cognitive peculiarities that spring from a world full of living toys. If, for instance, a child were to build a toy out of pipe cleaners and popsicle sticks, would that toy have life the same way a Barbie doll or a Buzz Lightyear would?

As it turns out, yes, as “Toy Story 4” introduces us to Forky (Tony Hale), the heart and soul of the film. Forky is a spork toy constructed during kindergarten orientation who springs to life and is immediately plunged into an existential crisis. If I am merely a piece of disposable cutlery, shouldn't I be in the trash? Forky spends the bulk of the film longing to reside in a trash can where he feels he belongs. He doesn't even understand what a toy is. The theological implications are staggering.

Woody (Tom Hanks), meanwhile, finds that he must keep Forky in good health to keep Molly happy. He has transformed into a neurotic parent tending to an oblivious toddler, a character angle last seen in “The Secret Life of Pets 2.” Woody is also facing his new status as lieutenant among the toys, often left in the closet during playtime, forcing Woody to also face his own potential mortality.

What happens to a toy deferred? Tracking back, this makes sense. The first “Toy Story” was about welcoming a new presence into your life, as perhaps a marriage. The second was about facing a new direction in your life and perhaps choosing a new path, á la a midlife crisis. “Toy Story 3” was about retirement and leaving your old life behind. It tracks, then, that “Toy Story 4” should contemplate death.

The plot involves Woody and the gang being taken on a road trip by Molly and her parents. This will lead Woody and Forky, through circuitous circumstances, into the frightening world of an antique shop overseen by the mad recluse Gabby Gabby (Christina Hendricks) and her frightening retinue of walking ventriloquist dummies. At the same antique shop, Woody also finds Bo Peep (Annie Potts) his onetime paramour and now professional Lost Toy, who survives by her wits, and who has become the working chieftain of all local lost toys. When it comes to 2019's onscreen heroines meant to stand as aspirational figures for young girls, I'll take the forthright, badass, and well-spoken Bo Peep over indistinct ciphers like Alita or Captain Marvel any day.

“Toy Story 4's” sense of humor has also darkened by a few shades since the last go-round, leading to an overall, and very welcome, oddball sensibility. It's easily the funniest in the series, garnering humor from fear and pathos, scraping up against the absurdity of its very premise. Watching toys go through an existential crisis is inherently, absurdly funny. It also calls into question how certain toys may feel about having to remain lifeless in front of humans, and, in a hilarious mid-credit cookie, reveals what a pair of carnival prizes (voiced by Key and Peele) would do to various human masters given the chance.

The humor, however, never distracts from Pixar's particular brand of effective heart-wringing sentimentality; those who are used to weeping softly during the bulk of Pixar's output will find plenty to use hankies for here. “Toy Story 3” ended the series well, but “Toy Story 4” is an unexpectedly perfect coda. It's one of the best animated films of the year.

Posted by Witney Seibold at 8:30 AM